Modern industries need metals to manufacturer the equipment required for different tooling and transportation needs in today’s time. The applications like cars, cranes, robots, skyscrapers and suspension bridges where metals and their alloys are used precisely for these industries. The metals are very strong & durable and make them a logical choice when the structure formed is big and sturdy. The strength of the metal makes it damage resistant along it may become difficult to manipulate it to the specialized size and shape as big as an airplane wing. The plasma cutter becomes the only logical choice in all the situations.

The plasma cutter is a commonest tool since the Second World War. In the war, time factories were busy making arm or, ordnance, and aircraft at a faster pace in the private industries to cut and join aircraft parts. In the early months of 1960, there was a new discovery where the temperature was boosted by speeding of the flow of gases and shrinking the hole for its release.

The States of Matter- There are always four states of matter in this world. The commonest states in our daily life are in the form of solid, liquid, and gases depending on the way molecules behave within one another. We may take the example of water which as a solid take the form of ice which is made up of neutral atoms arranged hexagonally. The molecule remains to stay mostly and can hold a shape. The water in liquid form takes a drinkable form with molecules bound to each other move relative to each other at a slow speed and shape to fit the container shape and size. The water in gas form is steam which moves around at a high-speed independent of each other with no fixed shape and size. The more energy excites molecules and breaks the bond of togetherness. The minimum temperatures keep the matter in solid-state and little more temperature escapes the rigid bond and forms the liquid while more heat makes it vapour a gas form of the water. 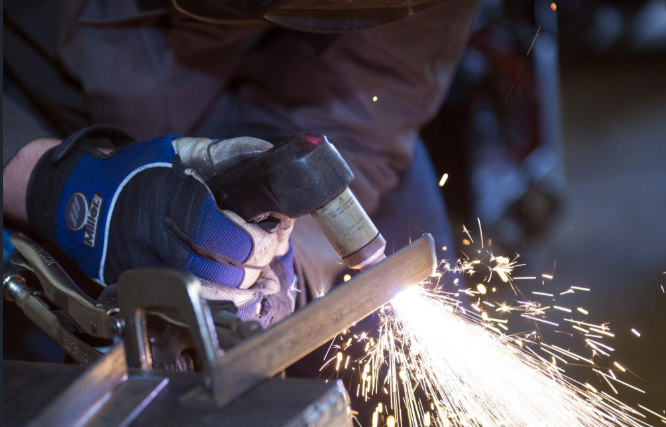 We can get plasma if we boost any gas to the high temperatures as it leads on to break apart the gas molecules and atoms to split. Any normal atom is made up of proton and neutrons in the nucleus and surrounded by a cloud of electrons. In the plasma form of gases, the electrons get separated from the nucleus. At the release of the energy from an atom, the electron moves quickly which are charged negatively and leaves behind positively charged nuclei as ions. The fast movements of electrons once collide with other electrons and ions release the energy which is plasma’s unique status & unbelievable cutting capability.

Inside a Plasma Cutter- The pressurized gas like nitrogen, argon, oxygen once passed through small channel make a plasma cutter. The centre of the channel in the torch have negatively charged electrode which creates a circuit once the tip of the nozzle touch the metal and generate a powerful spark. The spark makes the gas to change into the fourth state of matter creating plasma at the 16649 C and move at a speed 6096m/sec which reduces the metal to molten slag.

Shielding Gases – The pure oxygen, once used in mild steel produce a reaction, which helps to speed up the cutting and improve the cutting edge quality. The stainless steel and aluminum do not have the same reaction, so the less expensive gases like nitrogen or compressed air which is also mostly nitrogen may be used here. A mixture of Argon and Hydrogen is used when cutting is to be made in stainless steel and aluminium. Each mixture has advantages and disadvantages.

CRAZY IN LOVE WITH WELDING. Ramakant has a diversified background with industrial experience in welding and production management. He holds a master's degree (M.Tech.) in metallurgy and welding technology from SLIET University. He has experience in a number of industries, including power generation, defense, construction, mining equipment, and heavy engineering fabrication. He holds the positions of welding engineer, quality and inspection officer as well as general management. He has written technical welding articles, contributed to the various welding committees. For the past eight years, Ramakant has been a technical consultant, trainer, and spokesperson for Cruxweld.  View all posts by Ramakant Sharma

One Reply to “How a Plasma Cutter Works”